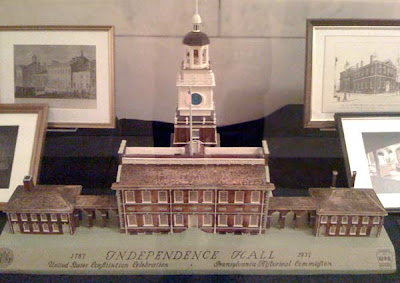 In a side hallway of the Supreme Court, 1937 scale-model of Independence Hall, one of twenty-six hundred created during Pennsylvania’s State-Wide Museum Extension Project is also on display. Produced by the Work Projects Administration (WPA) to mark the 150th anniversary of the 1787 ratification of the United States Constitution. They hoped to produce historically accurate models in 1/16” scale which would be reproduced in sufficient quantities for every school and local historical society in the country. Sculptors poured moulds and hundreds of plaster replicas were cast, painted, and then assembled. The replicas— each cast in ten separate sections— rolled off the assembly line to meet the deadline. Do you know of other WPA building replicas?
Posted by Dave at 9:14 PM

I have several WPA plaster models. I bought a few from Pat Smith and others from various places. I also have been trying to find out how many there were made - no luck.

Wonder if anyone else has any information.

I just remembered - doesn't Howie have this Independence Hall WPA model? I thought I saw it at his house when we visited earlier this year.

Hi Joe,
Thats for the information, I'll try to find out more about other WPA models. Yes, Howie does have a WPA Independence Hall in his collection.

I recently came across a WPA Independence Hall. The condition is not perfect and it is missing the center clock tower. Since there were so few made is it of value? It is something that I don't have room for but don't quite know what to do with it.