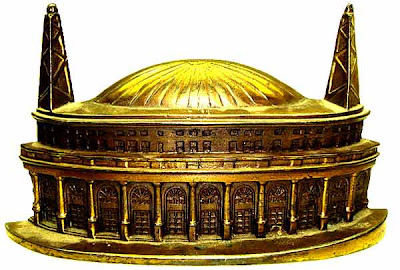 As the annual Souvenir Building Collectors Society's (SBCS) convention approaches, let’s take a closer look at some of the miniature building replicas from this year’s host city of Los Angeles. Avid reader of this blog, Scott D., researched and wrote the following post to share with everyone. In the coming weeks, I’ll write about additional L.A. landmarks and their miniature models.
'Completed in 1923, the Angelus Temple was the base of operations for Aimee Semple McPherson (1890-1944), a pioneer in the field of radio evangelism and the first to incorporate Hollywood and vaudeville-style entertainment techniques in her broadcast sermons and preaching. Her doctrines, summarized as the "Foursquare Gospel," have served as a m 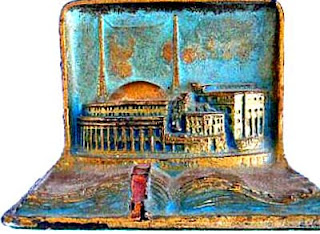 odel for many modern Pentecostal evangelists. McPherson had Angelus Temple constructed, following her design guidance, in a location opposite Echo Park Lake. It is an unusual gore-shaped, reinforced concrete domed auditorium which seats 5,300. The dome, surmounted by a highly visible neon-lit cross, served as a beacon to the vast numbers who came to hear Sister Aimee preach. During the Depression, the Angelus Temple provided an important food and shelter service to the entire community. On April 27, 1992 the entire temple was designated a National Historic Landmark. As recently as 2002, the temple was renovated back to its 1920’s glory days. There are two known versions of the temple. One is an electroformed polychrome bookend which appears to have been done about 1926 since it shows the 5-story L.I.F.E. Bible College building that was completed at that time and also the prominent new prayer tower. The miniature building sits on an open bible. It could possibly be made by Ronson. Such other bookends from the same time frame use this 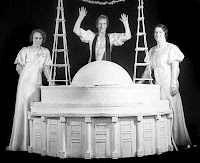 polychrome process and have the same character as other bookends they produce. Made out of brass, the second version looks to be a bookend as well and is much more detailed. It is just of the Temple itself and has the two radio towers located on top of the temple. That would put the date of this piece between 1924 and 1941 when the radio towers changed to a different type. (One of these replicas sold on eBay recently for $121) I contacted the Temple and they informed me that both versions at one time were for sale at their shop. You might want to consider visiting this historic landmark when you attend the Souvenir building convention in LA this coming June. An interesting building in the heart of L.A.' - Scott D.
Posted by Dave at 8:00 AM