Did you know this year marks the 150th anniversary of Big Ben? Construction

of the Clock Tower began in September 1843 and was completed in 1859. Throughout 2009, England’s Parliament celebrates the 150th anniversary of its world-famous Clock Tower, Great Clock and Great Bell with celebrations and events. Most people call the tower Big Ben; however, this name actually refers to the large bell inside. Officially, the Clock Tower's bell is called the Great Bell though it is better known by the name 'Big Ben.’ There are two theories for this name's origin. Mostl likely, it was named after Sir Benjamin Hall, First Commissioner for Works 1855-1858, whose name is inscribed on the bell. In another theory, its named after Ben Caunt, a champion heavyweight boxer of the 1850s. 1859 was the beginning for all three elements when the Clock Tower was completed. The Great Clock began to run on 31 May, the Great Bell’s strikes were heard for the first time on 11 July and the quarter bells first chimed on 7 September. You can hear the chimes here. Construction of the Clock Tower beg 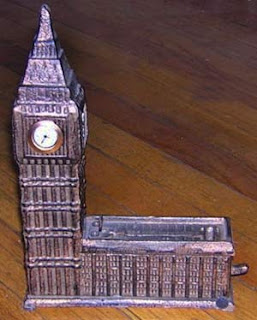 an in September 1843 and was completed in 1859. It stands over 96 metres and 12 metres square. There are 11 floors with 334 steps to belfry and 393 steps to lantern (the Ayrton Light). Check out a virtual tour of the clock tower. To celebrate the anniversary in their own way, two businessmen in Cheshire, England created a 72-foot sculpture to mark 150 years of the London landmark. They built a straw replica of London's 'Big Ben.’ It’s made with 450 bales of straw and features a working clock with two faces that are

illuminated at night. Other replicas of the clock tower which houses Big Ben and Houses of Parliament are souvenir buildings. An antique Parliament building is made of cast iron and stands 9 inch tall. A modern replica is an 8.5-inch metal replica of the clock tower with working miniature clock. Most collectors know about the small, copper-colored metal pencil sharpener of Big Ben’s Clock Tower which stands 4 inches tall. Do you know of other miniature replicas of the 150-year-old London landmark?
Posted by Dave at 8:10 AM

There are many different versions. The Lighter version I feel is the best. SD