For Memorial Day, Scott D. researched and wrote about some souvenir buildings which still show how they were affected by war.
"I recently came across a Rheims Cathedral Bookend that shows the affects of the artily shelling that took place in 1914. I found it very interested as it matched pictures from WWI that showed the damage done to the famous cathedral. The towers were shot up and debris lying at the bottom. The once proud cathedral looked tattered and torn. On the back of the bookend it says Rheims 1918. The way the cathedral still looked 4 years later at the end of WWI. With this I thought, what other souvenir buildings show the affects of war on them. Then I started looking through my collection. One of the most famous buildings that show the effect of war and also the start of the nuclear age is the dome building in Hiroshima. There have been a couple different versions of this now peace monument. The Hiroshima Prefectural Commercial Exhibition Hall was constructed in 1915 as a base for promoting the sale of goods produced in Hiroshima Prefecture. The building designed by Czech architect Jan Letzel was highly regarded for its imposing, European-style design. Its name changed to Hiroshima Prefectural Products Exhibition Hall and then to Hiroshima Prefectural Industrial Promotion Hall. Intensification of the war led the government to discontinue commercial uses of the Industrial Promotion Hall in March 1944. Instead, it housed the branch office of the Chugoku Shikoku Public Works Office of the Internal Affairs Agency and the offices of the Hiroshima District Lumber and Japan Lumber Control Corporation. When the atomic bomb exploded, it ravaged the building instantly. Heat blazing from above consumed the entire building, killing everyone in it. Because the blast attacked the building from virtually straight overhead, some walls escaped total collapse. Along with the wire framework of the dome, these form the shape that has become a symbol. At some point it became known as the "A-bomb Dome." In 1966, Hiroshima City determined to preserve the A-bomb Dome indefinitely and solicited funds from within Japan and overseas. To date, the A-bomb Dome has undergone two preservation projects. As a historical witness that conveys the disaster of the first atomic bombing in history, and as a symbol of the vow to pursue the abolition of nuclear weapons and enduring peace, in December 1996 the A-bomb Dome was registered on the UNESCO World Heritage List based on the Convention for the Protection of the World Cultural and Heritage. There are at least 3 different version of the Dome - all of which are hard to come by. Another building that I came across was the Kaiser Wilhelm Memorial Church in Berlin. Kaiser William II Decided to name the church in honor of his grandfather Kaiser William I. The foundation stone was laid on March 22, 1891, which was William I's birthday. The competition for the design was won by Franz Schwechten who planned for a large church to be built in neo-romanesque style, including 8,989 square Feet of wall mosaic. The spire was 370 feet in stature and the nave seated over 2,000 people. The church was consecrated on September 1, 1895. By this time of the consecration the entrance hall in the lower section had not been completed. This was opened and consecrated on February 22, 1906. During the Second World War, on the night of November 23, 1943, the church was irreparably damaged in an air raid. The church was largely destroyed but part of the spire and much of the entrance hall survived. A new church was designed by Egon Eiermann and consists of four buildings grouped around the remaining ruins of the old church. The initial design included the demolition of the spire of the old church but following pressure from the public, it was decided to incorporate it into the new design. The four buildings comprise, on the west of the ruins, the new church with a foyer to its west, and to the east of the ruins, a tower with a chapel to its northeast. The plan of the church is octagonal while the plan of the tower is hexagonal. These components are sited on a plateau measuring 100 meters long and 40 meters wide. The new buildings are constructed of concrete, steel and glass. The walls of the church are made of a concrete honeycomb containing 21,292 stained glass inlays. The glass, designed by Gabriel Loire, was inspired by the colors of the glass in Chartres Cathedral. The predominant color is blue, with small areas of ruby red, emerald green and yellow. The church is 35 meters in diameter and 20.5 meters high with a capacity of over 1,000. Because of the distinctive appearance of the new buildings, it is sometimes nicknamed "Lippenstift und Puderdose” (the lipstick and the powder box) by Berliners. There are versions of this church as it was before the 1945 bombing and a new pewter version showing what the church looks like today. As I’ve noticed most of these builds have been left in ruin as souvenirs of the cost and destruction of war. So they serve more than just the souvenir of a visit to the location but also thoughts of peace." - Scott D. 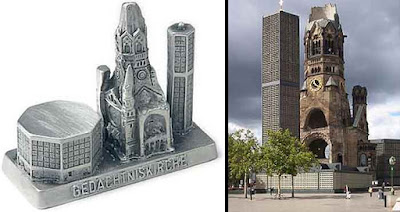