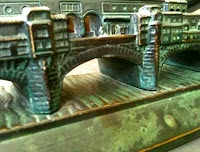 The Ponte Vecchio is a Medieval bridge over the Arno River in Florence, Italy. Meaning "Old Bridge" in Italian, the structure is famous for still having shops built atop it, as was once common practice. Initially occupied by butchers, the shops current tenants are jewelers, art dealers and souvenir sellers. Perhaps one day in the past these shops sold souvenir replica of the bridge itself. Recently, a vintage Ponte Vecchio Bridge replica was auctioned on eBay and sold for $536. Made of copper, a nice green patina has developed on its surface over time on the rare souvenir building. It measures 7 1/4 inches long by 2 1/2 inches tall and 2 3/4 inches wide. The only word on it is "Riservato" which mean 'reserved' - this should be a makers mark or or a copyright. Another, but much smaller, replica of this bridge is a 14k yellow gold charm. The measurement of this charm not including the bail is 1/4" long by 5/8" wide. Described as Europe's oldest wholly-stone, closed-spandrel segmental arch bridge, the real Ponte Vecchio spans the Arno river at its narrowest point. At the same spot, it is believed that a bridge was first built in Roman times when the via Cassia crossed the river there. The Roman piers were of stone, the superstructure of wood. The bridge first appears in a document of 996. After being destroyed by a flood in 1117, it was reconstructed in stone but swept away again in 1333 save two of its central piers. It was rebuilt again in 1345, Giorgio Vasari recorded the tradition in his day, that attributed its design to Taddeo Gaddi, besides Giotto one of the few artistic names of the trecento still recalled two hundred years later. The bridge consists of three segmental arches: the main arch has a span of 30 meters (98 ft) the two side arches each span 27 meters (88 ft). The rise of the arches is between 3.5 and 4.4 meters (11½ to 14½ feet). The bridge has always hosted shops and merchants who displayed their goods on tables in front of their stores. The back shops (retrobotteghe) that may be seen from upriver, were added in the seventeenth century. A larger scale replica of the Ponte Vecchio was also built in…you guessed it, 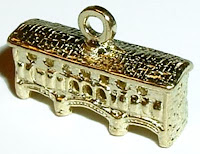 Las Vegas. The Ritz Carlton Las Vegas opened in 2003 and was designed in the Mediterranean style and built along the Lake Las Vegas area. Architectural features at the Ritz Carlton hotel
include vine-covered trellises, balconies, balustrades, shaded
loggias and a Florentine bridge, aptly named the Pontevecchio, which spans 375 feet across the Lake’s inner harbor. There are 350 rooms at the Ritz Carlton Las Vegas, Sixty five of these rooms are located on the Pontevecchio Bridge and the others in a tower building.
Posted by Dave at 4:57 AM

Yes these are very rare. I've only seen one other like it come up before. S