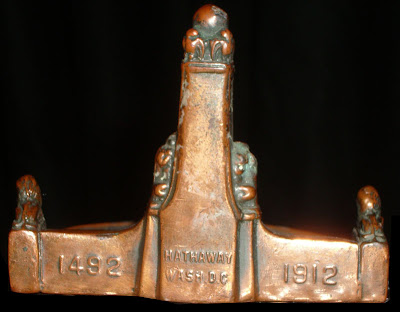 Today, we celebrate a navigator, colonizer and explorer. Christopher Columbus was from the Republic of Genoa in what is now Italy. He embarked on voyages across the Atlantic Ocean led to general European awareness of the American continents in the Western Hemisphere. With his four voyages of exploration and several attempts at establishing a settlement on the island of Hispaniola, all funded by Isabella I of Castile, he initiated the process of Spanish colonization which foreshadowed general European colonization of the "New World". Although not the first to reach the Americas from Europe, he was preceded by at least one other group, the Norse, led by Leif Ericson, who built a temporary settlement 500 years earlier at L'Anse aux Meadows. Columbus, however, initiated widespread contact between Europeans and indigenous Americans. Columbus Day first became an official state holiday in Colorado in 1906 and became a federal holiday in 1934. However, people have celebrated Columbus' voyage since the colonial period. In 1792, New York City and other U.S. cities celebrated the 300th anniversary of his landing in the New World. In 1892, President Benjamin Harrison call 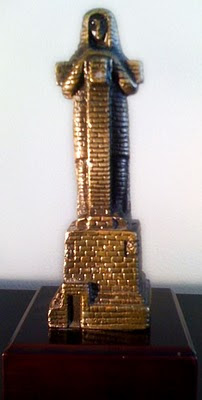 ed upon the people of the United States to celebrate Columbus Day on the 400th anniversary of the event. There are many statues and monuments to Columbus around the world, and a few how these have been reproduced in miniature. One of the most difficult to find is the souvenir replica of the Christopher Columbus Memorial Fountain and Statue in front of Union Station in Washington, D.C. Also referred to as "Columbus Fountain" or "Columbus Memorial Fountain", this monument was created by American sculptor Lorado Taft. The statue was dedicated June 8, 1912 and, as you might guess, was paid for by the Knights of Columbus. It is a focal point for D.C.'s Columbus Day celebrations. An inscription on the real monument reads, "To the memory of Christopher Columbus whose high faith and indomitable courage gave to mankind a new world / Born MCDXXXVI / Died MDIV." In the monument, Columbus is depicted looking beyond the winged figurehead representing Discovery on the ship's prow. On his right, facing west, is an American Indian representing the New World. On his left, facing east (see image below), is an elderly man representing the Old World. Above him, supported by four eagles, is a sphere bearing the outline of the western hemisphere. The souvenir replica of this monument only stands a few inches high and on the back is printed, "1492 1912 Hathaway Wash D.C." It was created for the Columbus Day Memorial Celebration and the dedication of this memorial on June 8, 1912 and Hathaway must have produced the replicas. This one is not listed in the book, Monumental Miniatures. Another statue which has an accompanying miniature is the columbus statue in Huelva, Spain.Designed by Gertrude V. Whitney, the large statue

comemorates the departure of the explorer on his third voyage of discovey. Columbus is thought by most to have been born in Genoa, Italy around 1451. After years of seeking funding support for an expedition which was to find a sea route to Asia, Columbus finally came to an agreement with King Ferdinand and Queen Isabella of Spain. They would (along with a number of Italian financiers) back his expedition in return for dominion over the any new lands. Columbus would be awarded titles and, of course, a percentage of any fortune that was made. Miniatures of this statue appear to be brass or pot metal and stand on a wooden base. The most common Columbus miniature is that of the statue and columbus in Barcelona, Spain. It stands about 7 inches tall and made of metal. The real Columbus Monument (Monument a Colom in Catalan, also known as the Monumento a Colón and Mirador de Colón in Spanish) is a 60 m (197 ft) tall monument at the lower end of La Rambla, Barcelona, Spain. It was constructed for the Exposición Universal de Barcelona and is located at the site where Columbus returned to Spain after his first voyage to the Americas. The monument serves as a reminder that Barcelona is where Christopher Columbus reported to Queen Isabella and Ferdinand after Columbus' most famous trip. Standing majestically atop a 40 m (131 ft) tall Corinthian column is the 7.2 m (24 ft) tall bronze statue. Sculpted by Rafael Atché, the statue depicts Columbus pointing towards the New World with his right hand, while holding a scroll in the left. As it was sited, instead of pointing to the west towards the New World, the statue points east towards Columbus's supposed home city of Genoa. Do you know of other miniature memorials to old Chris Columbus?
Posted by Dave at 6:30 AM

There is also the Columbus monument from of all places Columbus Oh! It's from the 60-70's. I'm still looking for this one and it's slipped out of my hand once!

I am looking to buy a (new or used) miniature model of the Columbus Monument and statue in Barcelona, Spain. Does anyone have any recommendations where I can find one such item for sale? Thank you!