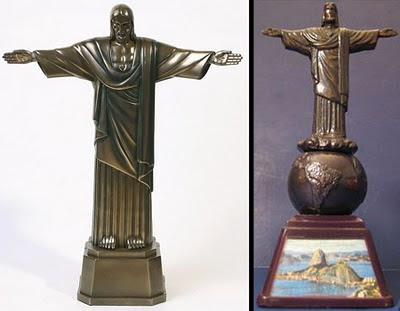 What has become a national symbol of Brazil, the Christ the Redeemer statue towers over the city of Rio de Janeiro. The statue of Jesus Christ is considered the second largest Art Deco statue in the world. Standing 39.6 meters (130 ft) tall, including its 9.5-meter (31 feet) pedestal, it weighs 635 tons. Located at the peak of the 700-meter Corcovado mountain in the Tijuca Forest National Park, he overlooks the city below. A symbol of Christianity, the statue has become an icon of Rio and Brazil. Local engineer Heitor da Silva Costa designed the statue and it was then sculpted by French sculptor Paul Landowski. Constructed out of reinforced concrete, the outer layers are soapstone, chosen for its enduring qualities and ease of use. Construction took nine years - from 1922 to 1931. In 2007, Christ the Redeemer was named one of the New Seven Wonders of the World. Souvenir replicas of the statue vary in size and material – from pot metal to plastic.