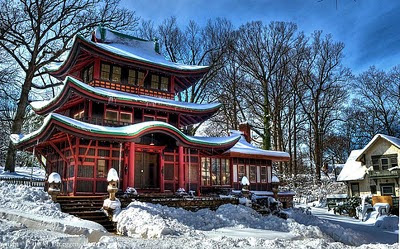 Most building collectors have a Pagoda in their collection, but just the miniature type. How about owning and living in a real Japanese Pagoda? Don’t want to move all the way to Japan? How about Maryland? Yep, just outside of Washington, D.C., a pagoda is for sale in Silver Spring. The 1,374 Square-foot house is priced at $375,000. The Japanese Pagoda is one four historic single family homes available on the campus of National Park Seminary adjacent to Rock Creek Park. Restored once in the 90's, this property needs some TLC to turn it into a modern showpiece. The building is in relatively good condition today, but the roof needs work. Built in 1905, the pagoda was part of Ye Forest Inne, a resort for Washingtonians looking to escape the city's oppressive summertime temperatures. Hit by financial hard times, Ye Forest Inne closed its doors at the end of the 1892 season. The former resort was then purchased by John and Vesta Cassedy, who re-opened it as a girls' finishing school with a class of 48 female students in 1894. Over the next 15 years, internationally-styled buildings sprouted up throughout the Campus as the school grew. Many unusual structures such as the Dutch Windmill, Swiss Chalet, and English Garden Castle were built on a small scale, as they were initially used only as sorority meeting houses. Elaborate, well-tended gardens and winding paths kept the buildings connected and created a whimsical, almost playful feel to the campus. Later, the property was annexed by the army in 1942 for use as a medical facility. By 1978, the army had abandoned much of the complex in favor of newer facilities and many buildings fell into advanced states of disrepair due to poor, or non-existent, maintenance. Vandalism and theft increased at shocking rates. Local preservation groups took action in 2003 to begin saving National Park Seminary and restoring it to its original glory. The large building are becoming condos and smaller buildings are homes.

I have been to the campus many a time as I have a photographer friend near by. It is said that the Pagoda is haunted.