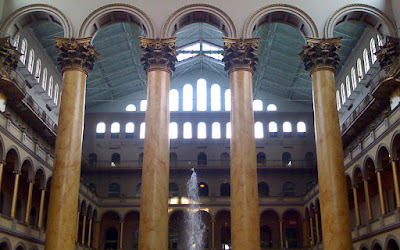 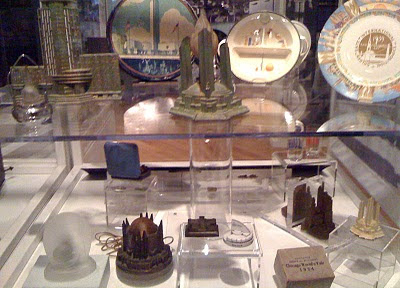 One stop on this year’s SBCS convention will the National Building Museum to visit “Designing Tomorrow-America's World's Fairs of the 1930s” exhibition, which contains pieces loaned by SBCS members. Six SBCS collectors have eleven pieces in the exhibit. We’ll have a special tour of the exhibition and also get a special architectural tour of the NBM, originally built as the Pension Building in 1887. While not as well know as other buildings in D.C., it is not to be missed for architecture fans. Special features include the Great Hall measuring 316 × 116 feet, the spectacular interior columns and a frieze, sculpted by Caspar Buberl, stretching around the exterior of the building and depicting Civil War soldiers. The Designing Tomorrow exhibit will go on the road to other museums after our visit. According to the NBM’s website, “Between 1933 and 1940 tens of millions of Americans visited world's fairs in cities across the nation. Designing Tomorrow explores the modernist spectacles of architecture and design they witnessed -- visions of a brighter future during the worst economic crisis the United States had known. The fairs popularized modern design for the American public and promoted the idea of science and consumerism as salvation from the Great Depression. A first-of-its-kind exhibition, Designing Tomorrow features nearly 200 never-before-assembled artifacts including building models, architectural remnants, drawings, paintings, prints, furniture, an original RCA TRK-12 television, Elektro the Moto-Man robot, and period film footage. The artifacts are drawn from the featured expositions: Chicago, IL—A Century of Progress International Exposition (1933–34); San Diego, CA—California Pacific International Exposition (1935-36); Dallas, TX—Texas Centennial Exposition (1936); Cleveland, OH—Great Lakes Exposition (1936-37); San Francisco, CA—Golden Gate International Exposition (1939-40); and New York, NY—New York World's Fair (1939-40).” InFocusTech made a replica of the NBM structure a few years ago and a special convention souvenir is planned for this year’s SBCS event. If you have time, you might want to catch another small, but interesting display: Towering Ambition LEGO Exhibit upstairs. Adam Reed Tucker built 15 structures from around the world made entirely from LEGO bricks. Another place to stop inside the NBM is the museum shop – one of the best I’ve visited for architecture enthusiasts. I’ve written before about LEGO architecture here and here.