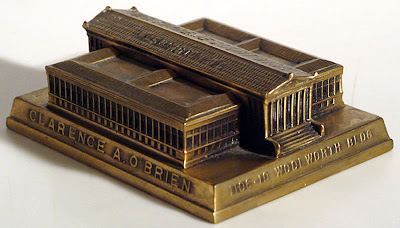 Dixie Trainer encouraged Rehberger to produce a very limited amount of Supreme Court replicas from the original mold in the 1990's. That replica building stands 1.5" tall and the base is 3.5 x 4.25 inches. One of these Rehberger recasts sold on ebay for $262. A few years ago, resin replicas of the highest court in the land were available in the gift shop. However, the last time I was there, no souvenir building in any material were available. The real Supreme Court Building, constructed between 1932 and 1935, was designed by noted architect Cass Gilbert, who is best known as the architect for the Woolworth Building in New York. The classical Corinthian architectural style was selected because it best harmonized with nearby congressional buildings. The building was designed on a scale in keeping with the importance and dignity of the Court and the Judiciary as a coequal, independent branch of the United States Government, and as a symbol of "the national ideal of justice in the highest sphere of activity." Sixteen marble columns at the main west entrance support the portico and on the architrave above is incised, "Equal Justice Under Law." Capping the entrance is the pediment filled with a sculpture group by Robert Aitken, representing Liberty Enthroned Guarded by Order and Authority. I’ve written before about the court’s gift shop and original architectural model.