Daughters of the American Revolution Monument 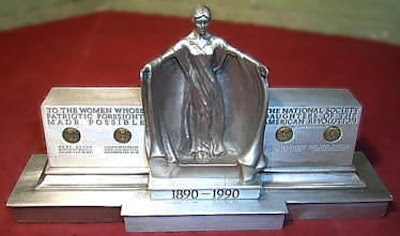 Called the Founders Statue, this monument is located next to the Daughters of the American Revolution building, Constitution Hall in Washington, D.C. On April 17, 1929 under the leadership of President General Grace L. H. Brosseau, the National Society DAR dedicated this memorial to its four founders: Mary Desha, Mary Smith Lockwood, Ellen Hardin Walworth, and Eugenia Washington. Noted artist and DAR member Gertrude Vanderbilt Whitney sculpted this beautiful monument from Tennessee marble. The graceful, feminine form depicted here is typical of Whitney’s sculptures. The human figure was her favorite medium through which to illustrate the expanse of human emotions and ideas. On the memorial is written, “TO THE WOMEN WHOSE PATRIOTIC FORESIGHT MADE POSSIBLE THE NATIONAL SOCIETY DAUGHTERS OF THE AMERICAN REVOLUTION 1890-1990” A souvenir replica of this monument seems to be well made of silver/aluminum metal, but not much is know about it.