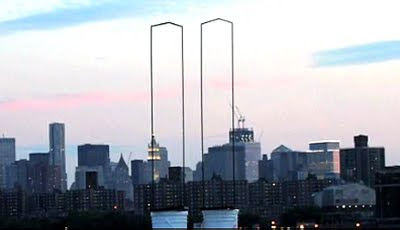 As we approach the 10-year anniversary of the horrific events of September 11th, one man is hoping to bring back the towers, if only virtually. New Yorker Brian August wants to build a mobile phone app called 101 Stories. Users can point their smart phone from any NYC-area location to create a photograph with an outline of the WTC. A message from the user can appear with the photo on an online map. Its an interesting high-tech way of commemorating the anniversary. By allowing anyone to create their own perspective and vision of the twin towers, the mapping system and comments may produce a poignant body of work. Thanks to Building Collector reader Howie G. for sending me this link.