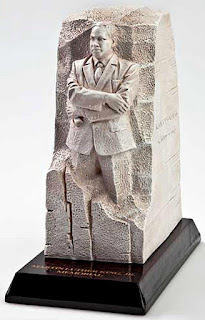 Named, “Mini Stone of Hope,” a miniature replica of the Martin Luther King Jr. Memorial is available both at the site and on the online gift shop. It’s an exact replica of the 30-foot sculpture located at Dr. King's Memorial produced in resin. This piece was commissioned and designed by the King Memorial's Sculptor of Record, Master Lei Yixin. Dimensions are 6.5"H x 6.5"L x 3.5"W. The real Martin Luther King, Jr. Memorial is located in Washington, D.C. and is the newest memorial on the National Mall. It commemorates the year that the Civil Rights Act of 1964 became law. Covering four acres, the memorial opened to the public on August 22, 2011, after more than two decades of planning, fund-raising and construction. The memorial's design, by ROMA Design Group, a San Francisco-based architecture firm, was selected out of 900 candidates from 52 countries. The centerpiece for the memorial is based on a line from King's "I Have A Dream" speech: "Out of a mountain of despair, a stone of hope." A 30 feet (9.1 m)-high relief of King named the “Stone of Hope” stands past two other pieces of granite that symbolize the "mountain of despair." Recently, it was discovered that a quote carved in stone on the new Martin Luther King memorial was incorrect and will be changed after the inscription was criticized for not accurately reflecting the civil rights leader's words