The Bank of England Souvenirs 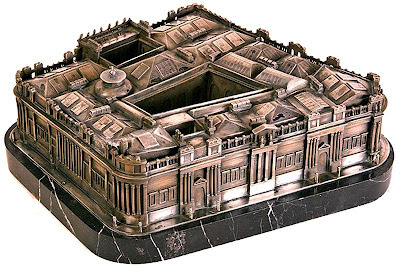 One of the granddaddies of souvenir buildings is a sterling silver replica of the Bank of England. The one above is part of the Ace Architects’ collection. David Weingarten sent me photos and wrote, “Like the actual building, this model has an irregular plan, roughly 10 inches square and 4 inches high. The detail shows the piece's hallmarks. From left to right, these show the piece was made by Frederick Edmonds, .925 sterling silver, in London, 1897. Interestingly, we've found several mentions in the press, all from 1897, in papers on both sides of the Atlantic, including the Liverpool Mercury, The Critic, Altamont Enterprise, and Kansas City Journal. All describe this as a gift to Dumont Clarke, President of the American Enterprise bank, in New York. Taken together, the several accounts claim the model required 12 months to fabricate, was valued at $1,000, and was made either by a London silversmith (as the hallmarks indicate), or by Tiffany. The following links to an article in The Critic, (in the upper left hand of the page) which is characteristic.” 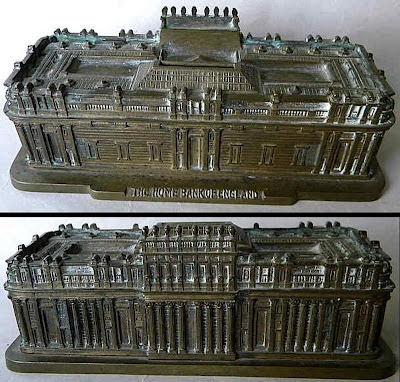 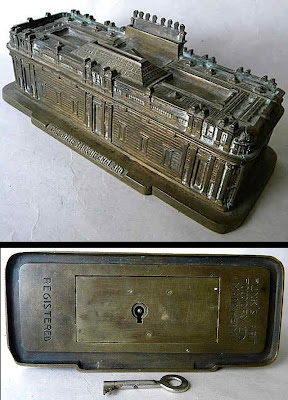 Another rare replica of this same bank is perhaps more recent (1920s?). This model of the bank is a coin bank. This replica represents just th building before the structure’s expansion to take up an entire city block. On the base are the words, “Home Bank of England.” This one appears to be a brass casting with the words underneath, "Funk's Art Foundry Ltd. Mannheim. Registered." David W. wrote about this version, “Mannheim, of course, is a German City. In this period, other English souvenir buildings, made in Germany, were imported to the UK; though I cannot think of examples marked in this way.” The dimensions of this Bank of England are 3 1/2" x 7 1/2" x 3" high. One sold recently on eBay for $1450. Interestingly, David W. has a slightly different version of this coin bank that includes a small ring on its base, which is not on the recently sold eBay version. Anyone have an idea what it could be? See photo below. 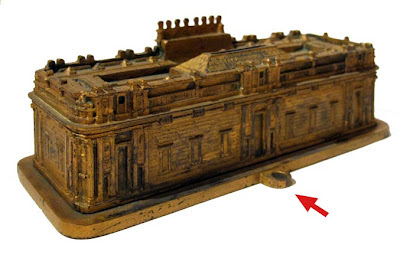 Yet a third miniature replica of this bank is a small ceramic coin bank version. This souvenir building made by Szeiler Studio in England in the late 1960's. This replica is hand-painted glazed ceramic in a dark brown color. It stands 3.75" tall, by 4.5" wide and 3.5" deep. The money slot is on the top which reads "BANK OF ENGLAND", and the round trap on the underside. One of these sold for $40 on eBay recently. 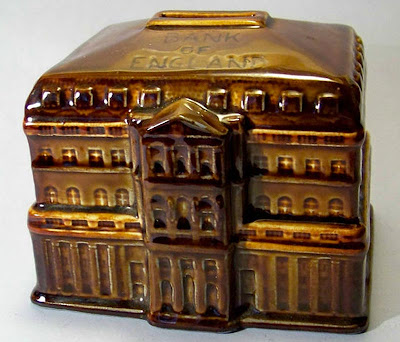 The Bank's headquarters has been located in London's main financial district, the City of London, on Threadneedle Street, since 1734. It is sometimes known by the metonym The Old Lady of Threadneedle Street or simply The Old Lady. The Bank of England moved to its current location on Threadneedle Street, and thereafter slowly acquired neighboring land to create the edifice seen today (an entire block). Sir Herbert Baker's rebuilding of the Bank of England, demolishing most of Sir John Soane's earlier building was described by architectural historian Nikolaus Pevsner as "the greatest architectural crime, in the City of London, of the twentieth century." The structure of 'Soane's Bank of England' remained more or less untouched until it was demolished and a new building erected by the architect Herbert Baker between the two World Wars. 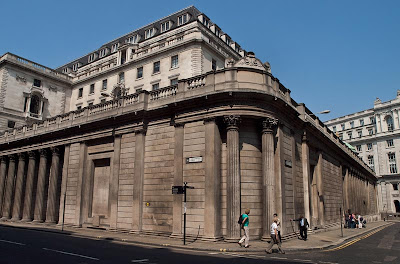 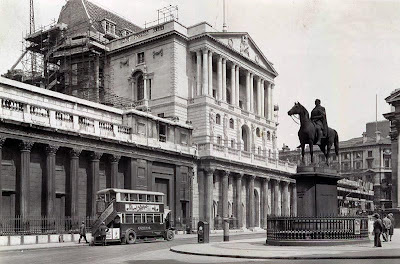 I had 2 European banks, brass or bronze (one 1910 the other 1920's) with an eyelit ring protruding from the base. The seller of the "ringed" Dutch bank stated that it was a donation box and was by means of a screw affixed to the countertop to deter theft of the monies inside. Screw taken out, bottom trap opened and donations removed.

Hi SP, Thanks for your comment. That very well could be the reason for this eyelit on the bank's base.

Great points there, thanks. And here is the relevant article, maybe someone will find it useful too
https://cgifurniture.com/3d-product-modeling-companies-furniture-marketing/

Just reach us if you are looking for the best residential property in haridwar. On your way to Rishikesh from Haridwar, Ambika divinity Haridwar is a place where you will find a rare opportunity to acquire your property in Uttarakhand. Haridwar in itself is a place packed with several attractions which acts as a gateway to all the religious pathways in Uttrakhand. ADH has to offer you 1BHK flats in haridwar and 2bhk flat in haridwar for sale.

An affordable range of cottages in Nainital. which are close to nature in a tranquil setting of Naintal

Purchase a property in Uttarakhand with indus valley mukteshwar.

There is no such thing as a single license for the 원 엑스 벳 whole United States of America. Depending on the place your online playing company is licensed, there additionally be} sure markets the place you can not operate. These are specified by the licensing authority of the respective jurisdiction and additionally be} topic to change. Fast Offshore advises all shoppers that they respect these limitations and do not supply their product to residents in these countries.

We are a family of experienced media buyers who share their knowledge with publishers to help them in achieving maximum profits.
They have all the potentials to generate traffic in all verticals and respective geos.