Usually marked, "Almar - Point Marion - PA,"  these building replicas all have the same dark bronze finish, the same distinctive beveled base, and are all replicas of Pennsylvania architecture. They were produced by the Almar Metal Arts Co, Point Marion , Pa. The company made other pot metal figurines. Searching online, I could only find other products this company created and nothing about the company itself. Almar produced 4 souvenir buildings replicas:


Originally called "Main Building," The Pennsylvania State University’s first building of major significance was completed in 1863 after a six-year period of construction. Hugh McAllister designed the structure to contain classrooms, laboratories, offices, a chapel, and residential space for 400 students. The structure was rebuilt in 1930 and today, Old Main serves as the administrative center of Penn State, housing the offices of the president and other officials. 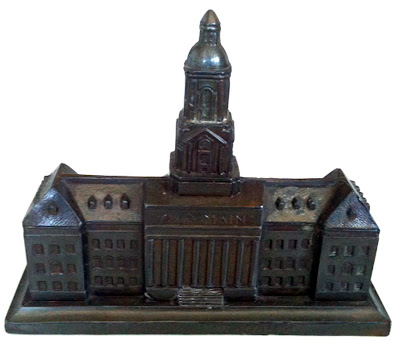 
When President Theodore Roosevelt attended the dedication of the building on October 4, 1906, he said, “This is the handsomest building I ever saw.” The Capitol was designed in the American Renaissance style by Philadelphia architect Joseph Huston who envisioned the building as a “Palace of Art.” The building incorporates various Renaissance designs in some of its largest rooms: Italian in the House Chamber, French in the Senate Chamber, and English in the Governor’s Reception Room.  It also reflects Greek, Roman and Victorian influences in its art and ornamentation. Throughout the building, Huston blended the various styles with motifs featuring Pennsylvania’s achievements in labor, industry and history, making the Capitol uniquely American.  Its five-story exterior is faced with handsome Vermont granite, and the roof is composed of green glazed terra cotta tile. The Capitol’s centerpiece is a spectacular 272-foot, 52 million-pound dome inspired by Michelangelo’s design for St. Peter’s Basilica in Rome. 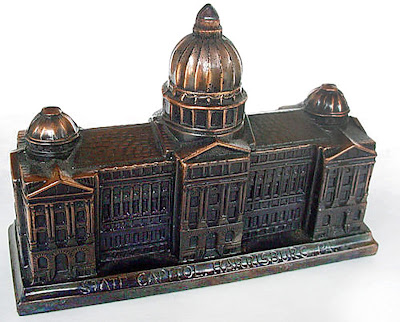 
The Zembo Shrine Building, also known as the Zembo Mosque has a Moorish Revival architectural syle. It was built in 1930 by the Harrisburg Masonic Shriners. The Shrine is not a reproduction of any existing building, but the architect, Charles Howard Lloyd, stated that he “dipped deeply into the spirit of the North African styles” and here and there are instances of an especially beautiful Moroccan detail.  The interior design includes examples of beautiful Moroccan influenced arches, chandeliers and ornate hand-painted motifs. Currently a resin replica is available at their gift shop. 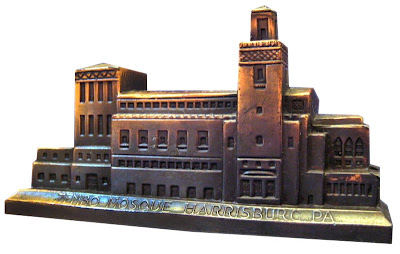 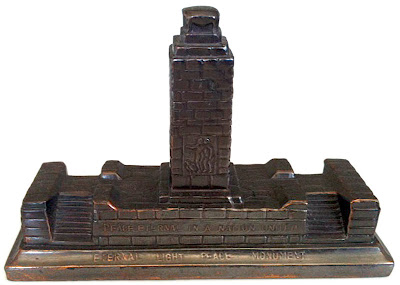 Thanks for putting this piece together! I have 3 of these and did not realize they were from the same maker. Now I have to get the 4th!