Building Collector reader, David W., recently informed me of two silver building models were recently auctioned for large sums. The "HARRODS-SELFRIDGE WAGER PRIZE" is a George V silver cigar box in the form of the Harrods Department story in London. Made in 1927, each facade realistically reproduced to scale, the roof under the central dome hinging open to reveal a cigarette compartment lined in wood, all upon a stepped stained-wood base, marked on base and roof 24 in. (61 cm.) wide; 21 ¼ in. (54 cm.) long; 6 7/8 in. (17.5 cm.) high. The replica was the winner’s prize for a private wager made on  January 4th,  1917 between the managing director and later chairman of Harrods, [Richard] Woodman Burbidge (1872-1945) and Harry Gordon Selfridge (1858-1947), the owner of Selfridges. Commissioned by Sir [Richard] Woodman Burbidge 2nd Bt., chairman of Harrods, in 1927 from the Harrods silver workshops, Trevor Square, the cost of £400 being met by the loser Harry Gordon Selfridge. The architecturally detailed model has intricately cast and chased facades. It is conceived as the store appeared in 1927. Harrods was the masterpiece of the C. W. Stephens, architect of Claridges Hotel. The massive building evolved over many years but the primary period of building stretched from 1894 to 1912 with work taking place when funds and land acquisitions allowed. The main Brompton Road façade, faced with Doulton terracotta tiles, rose up over four years, the staged process allowing the store to remain open and trading. The lavish interiors, also decorated with Doulton tiles, were the work of the designer Frederick Sage and his studio The House of Sage. Another finely made building replica auctioned represents the Aswan Dam in Egypt and was made about 1933. Measuring  9-3/8 x 20-3/4 x 10-3/8 inches, the model was presented to King Farouk I of Egypt on 25th January, 1939. The far left side depicting the original dam completed in 1902, the middle section representing the first heightening and thickening of the dam which was completed in 1912. The far right side represents the third heightening of the dam, inaugurated in 1939 by King Farouk I, who laid the final stone. The realistic model at a 1/200 scale with accurate details of the dam's sluice gates and thickening of the dam with time, chased Egyptian Royal Emblem to center, to the left of the emblem, inscribed in Arabic:
In memory of the attendance of his Majesty King Farouk I To lay the final stone in the second heightening of the Aswan Dam From "Topham, Jones & Railton" and Abood Pasha In 5 Dhul-Hi'jjah 1357-25th January 1939 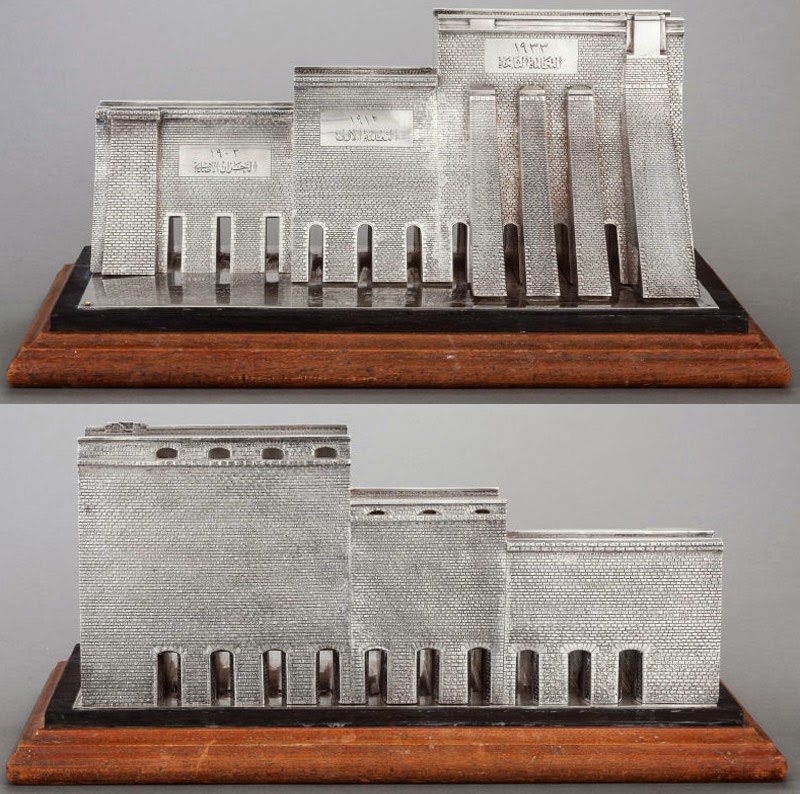