House of the Temple: Site Report 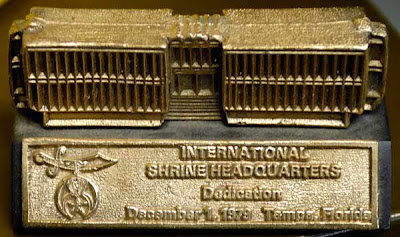 Recently, I took a tour of the House of the Temple which is the headquarters of the Scottish Rite of Freemasonry in Washington D.C. Located on 16th Street, this mo 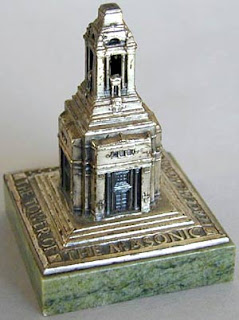 numental building in the nation’s capital has been the national HQ of the Supreme Council since 1915. Visitors can not only view the impressive architecture, but I noticed some other things of interest to souvenir building collectors during a recent tour of this building. There are some miniature replicas on display, but it sometimes takes a keen eye to pick them out because the many display cases are filled with numerous historical items. I saw a miniature a souvenir from the December 1, 1979 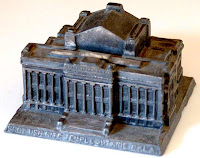 dedication of the International Shrine Headquarters in Tampa Florida is rare and not pictured in MM book. The low metal building is mounted on a wooden base. (photo above) A souvenir building replica of The Tower of the Masonic Peace Memorial made in 1933. It has a silver finish on marble base. The real building, the third on this site, was built in London between 1927 and 1933 in the art deco style to the designs of architects Henry Victor Ashley and F. Winton Newman as a memorial to the 3,225 Freemasons who died on active service 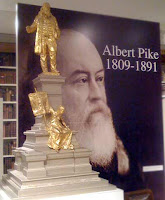 in the World War I. It is an imposing art deco building, covering two and one quarter acres. Initially known as the Masonic Peace Memorial, the name was changed to Freemasons' Hall at the outbreak of the World War II in 1939. A souvenir of another Scottish Rite Temple in Guthrie, Oklahoma was also on display. I’ve seen these 1920s-era replicas in gold, lead and white painted finishes.
Down in the basement site an enormous replica of the Albert Pike Monument sculpted by G. Trentanove and erected by the Supreme Council, 33 in 1901. The real statue is located in Judiciary Square in Washington, D.C. A huge replica of Mount Rushmore called the Shrine of Democracy was created in 1991. The sculptor was Dale Claude Lamphere and it was cast by Maiden Foundry. 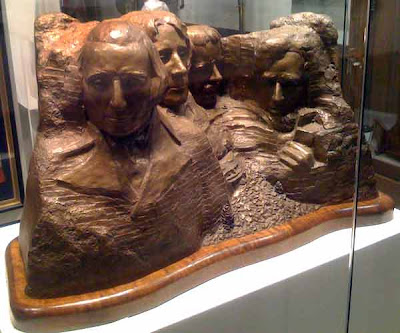 Plaster replica of a lion with a human face marked Washington DC 1935 is also on display. 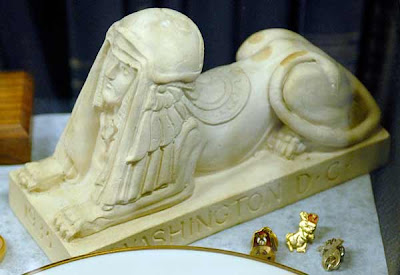 You can just show up for a tour of the building and get info about Freemasonry and the Scottish Rite. However, the hours they are open are not always convenient.
Posted by Dave at 8:00 AM

I noticed some other miniature buildings in the America area. SD

I generally check this kind of article and I found your article which is related to my interest. Genuinely it is good and instructive information, masonic regalia royal arch Thankful to you for sharing an article like this.