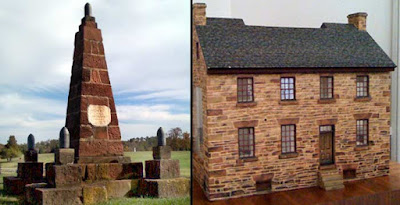 A monument to Union soldiers during the Civil War can be found on Henry Hill at the Manassas National Battlefield Park in Virginia. The Henry Hill Monument sits next to the Henry House. Union soldiers built the Henry Hill Monument to commemorate those who died at First Bull Run (First Battle of Manassas). For many Civil War veterans, this had been their first battle. Intense memories drew both Union and Confederate soldiers back to this scene years after the war. The inscription on the front of the monument reads: “In memory of the Patriots who fell at Bull Run July 21, 1861.” Part of the monument is made with large 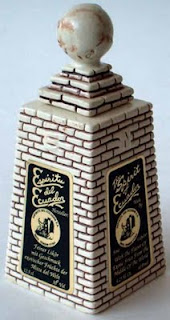 cannon mortars. Does anyone know if a miniature souvenir replica of this monument was ever created? I visited the Manassas National Battlefield Park recently and saw this Civil War monument and noticed a miniature of the stone house in the museum (see photo above) I was struck on how similar the design of the Henry Hill Monument looks to the Equator Monument in Ecuador, South America. The Mitad del Mundo (Spanish for “middle of the world”) is a park in Ecuador which contains the equator marker. The 30-meter-tall monument, built between 1979 and 1982, was constructed to mark the point where the equator passes through the country in the geodetic datum in use in Ecuador at that time (Today’s more accurate GPS systems have found that the equator is really about 240 meters north of this marked line) The pyramidal monument, with each side facing a cardinal direction, is topped by a 4.5 meter diameter, 5-ton globe. Inside the monument is a small museum that displays elements of indigenous Ecuadorian culture, such as clothing, descriptions of the various ethnic groups and examples of their activities. Mitad del Mundo contains other attractions such as a Planetarium, an amazing miniature model of Quito, the capital of Ecuador and restaurants. On weekends, Mitad del Mundo's Central Plaza is host to varied musical and cultural presentations for tourists. Countless tourists over the years have had their pictures taken straddling this line. Souvenir replicas of the Equator Monument have been made over the years in a variety of materials and sizes. I’ve seen them in metal, stone, wood, plastic and even a small ceramic liqueur bottle. Does anyone know other monuments with this same design? Are the similarities just coincidence? 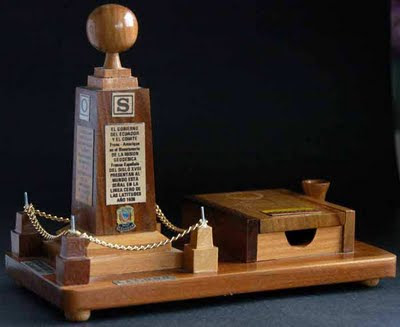 There is a miniature version of the Stone House that was made a few years back. Resin of course. SWD