Most people go to a stadium to support a team, see a concert or attend an event. We can cheer for the players, do the wave and feel part of the action. As building collectors, we want to also own a piece of the action. Recently, you even had a chance to own a full-sized stadium. The hard-hit city of Pontiac, Michigan is auctioned off the Silverdome, a stadium of more than 80,000 seats that once played host to Super Bowl XVI in 1982 and the former 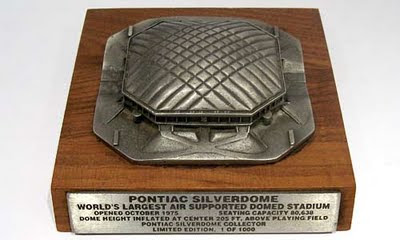 home of the National Football League's Detroit Lions, went on the auction block. A Canadian real estate company won with a bid of $583,000. Sitting on 127 acres, the Silverdome was the biggest stadium in the NFL when it was built for $55.7 million in 1975. Building Collector reader Howie send me a link to some additional stadiums which have fallen on hard times. A souvenir pewter replica of the Pontiac Silverdome was created in a limited edition of 1000. Miniature stadium replicas are popular and come in a wide variety of ages and styles. Bob E., who has a subset of stadiums within his building collection, sent me stats and details of many more stadium replicas. There are so many miniature stadium replicas, however, I’m breaking this up into a few posts, the first of which is below. Enjoy. 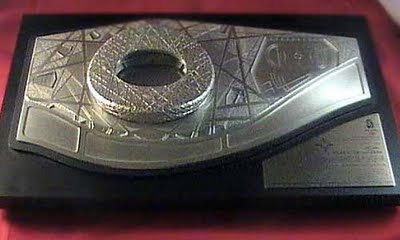 Chinese National Stadium, (also known as the “Birds Nest”) Large version from 2008
Scale 1:2500
16.5” x 9.5” x 3” tall
Made of a Zinc Alloy, name plate made of steel left over from the construction
Black lacquered wooden base
Stadium dome lifts off to show interior 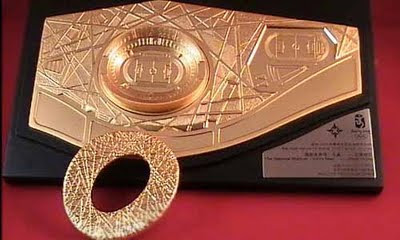 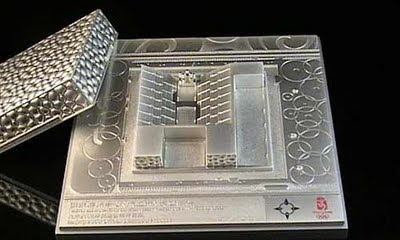 Chinese National Aquatics Center, (better know as the “Water Cube”) Small version made 2008
Scale 1:2185
5.75” square by 1.5” tall
Pewter or Steel with a bright sliver finish
Metallic silver painted wood base
Arena skin lifts off to show pools inside
Made by Model Craft 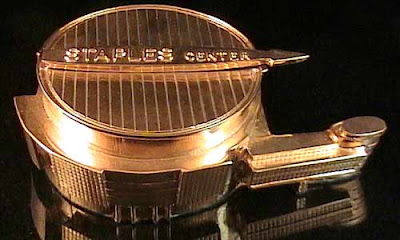 Staples Center, LA, 1999
4.5” in diameter (6” long with Press Center) 1.75” tall
Made by DRB Creations a commission from the Staples Corp. who rejected the order.
Solid pewter with gold plating, very heavy, cast in two pieces
Only twenty were produced 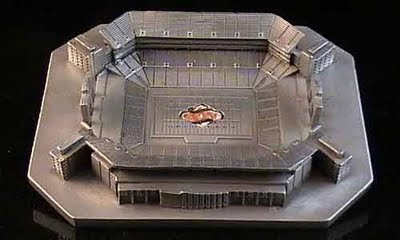 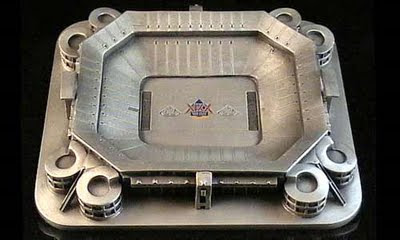 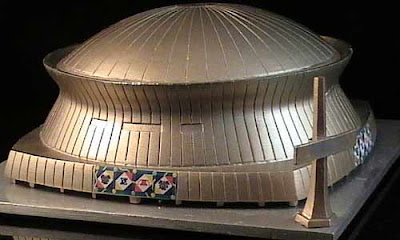 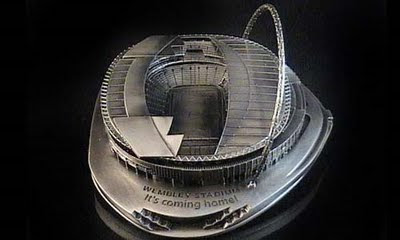 Wembley Stadium, London, 2007
Created for the opening of the new stadium
Stainless Steel with stain highlights
8.25” x 7.5” x 3.75” tall at the decorative arch
Made by First Team Sports Limited 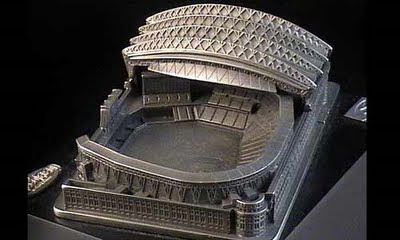 Safeco Field, Seattle, 1999
Created for the opening of the new stadium
Pewter on a black enameled wood base
6” x 5” x 2.5” tall
No makers mark 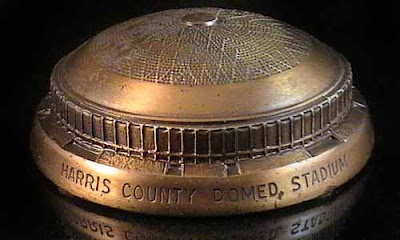 Harris County Domed Stadium (Astrodome), 1960’s
A give away from the First State Bank of Bellaire
Pot metal
5” in diameter x 2” tall
coin bank made by Banthrico
Posted by Dave at 8:00 AM

Are you selling these? If so how much are you looking to get for the Astrodome/Harris County Domed Stadium?