Collector, Howie G., sent me the information below about a rare and previously unidentified souvenir building and his efforts to track down its location. 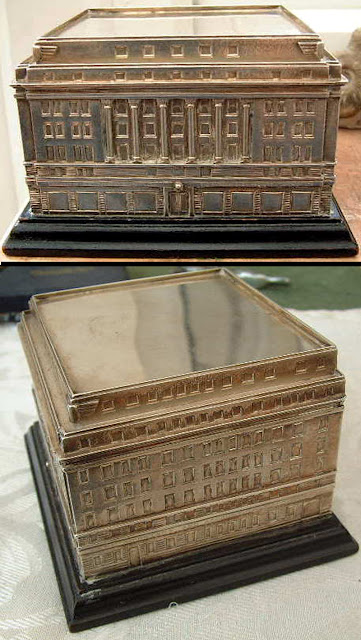 “For some collectors, it’s the thrill of the hunt. For others, it’s getting a bargain. For me it’s researching a mystery building. Such was the case when I spotted a distinguished looking, heavy gauge silver American National Cash Register Co. cigar box replica of a building offered for sale on eBay a few weeks ago. On the side it is inscribed, “Cash Registers and Accounting Machines.” The seller opined that it might have been based on an old NCR Head Office (headquarters) Building in Dayton, Ohio. Made by the famous Silversmiths Mappin and Webb from heavy-gauge sterling silver, the box is five and one-eighth of an inch long, three and one-eighth of an inch high and four and a quarter inches wide (the actual silver model is four and three eighths of an inch long, two and five eighths of an inch high and three and five eighths of an inch wide). It is hallmarked on the back in two places for London 1936-7 and weighs 626g. Not recognizing the building, I began checking the NCR company web site, which led me to additional research about old manufacturing buildings in Dayton, Ohio where the company was founded, both to no avail. A check of global building databases proved similarly fruitless results. As the seller was based in the UK, I then turned his attention to researching NCR buildings overseas, eventually narrowing the search to London and the Marylebone neighborhood. A database of NCR alumni in the UK included descriptions of various NCR buildings and finally a picture and very detailed description of the 1936 presentation piece offered for sale. According to the alumni web site “in the early 1930’s it became apparent that the Tottenham Court Road premises were too restrictive for the new Accounting Machine Era and a decision was made to construct a new purpose built Headquarters in Marylebone.  This building has been designed to accommodate a large and important commercial company, and owing to the very specialist nature of this firm’s productions the conception of the design proved both intricate and interesting. The problem of design was to provide a building which would prove efficient in its internal arrangements and at the same time be of such a dignified design as befits its important situation in Marylebone Road.” – Howie.

Howie shared his research with the seller, who is now on the lookout for additional souvenir buildings for Howie to add to his collection. 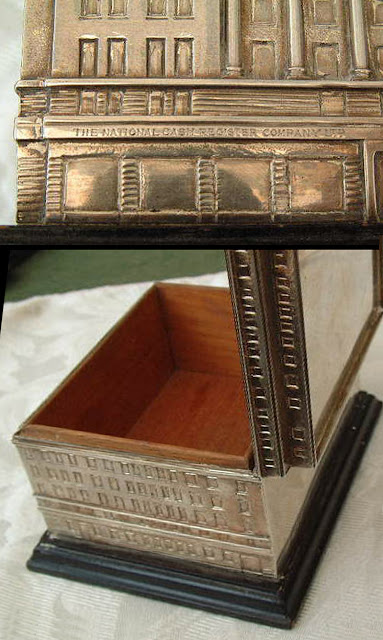