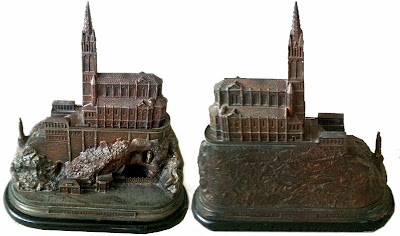 I recently acquired this large metal replica of Basilica in Lourdes, France. (see photo above) I love the size (over 13 inches tall) and fine detail in the miniature building. One thing struck me though – it’s not an exact replica of the existing church as it looks today. Missing are the two spires and the large complex in front that includes another church under wide walkways above (Compare to the photos, below, of another large version of the Basilica)  Where the spires would be are two matching 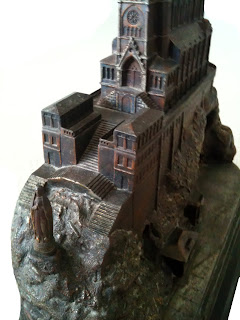 low rectangular structures. Why the difference, I wondered? While researching the building, I came across this fact:  “The exterior is dominated by a 70m spire, and two lesser spires (not completed until 1908).” Could my replica depict and earlier version of the basilica or an early planned design? Might this one show a pre-1908 view of the structure? This difference reminds me of souvenir replicas of Saint Joseph's Oratory in Montreal, Canada. I wrote about how that church’s design changed between 1922 and when it was completed in 1967. As a result, two replicas were made of the same church – The structure as planned and the structure as constructed. My version of the Basilica at Lourdes stands tall atop a rocky hill. On the front of the metal replica is written, “Notre-Dame de Lourdes” and the back, “Propriete V.B.” and “Depose” The real site became a sacred after a girl claimed to have experienced a series of apparitions of the Virgin Mary. The official name for this structure is the Basilica of Our Lady of the Immaculate Conception and known widely as the "Upper Church."  The Roman Catholic Church and minor basilica within the Sanctuary of Our Lady of Lourdes in France, was constructed between 1866 and 1872 and consecrated in 1876, it was the second of the churches to be completed. The church was built on top of the rock above the Grotto and next to the Basilica of our Lady of the Rosary. The elaborate Gothic-style building, designed by architect Hyppolyte Durand, seems to emerge directly from the rock of Massabielle (the sanctuary is directly above the Grotto). Do you have information about these two versions of the Basilica Notre-Dame de Lourdes? 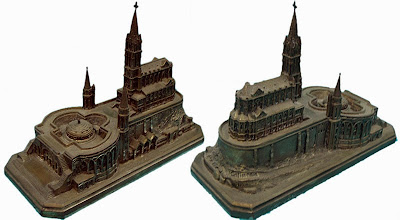