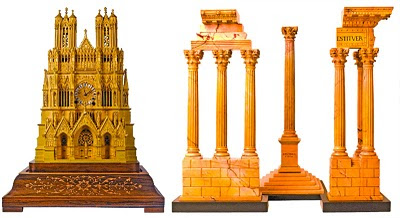 With a trip to the San Francisco Airport, you can also travel through time. You could be lucky enough to have a layover there, but you might make a special journey to see an exhibit of amazing souvenir buildings. David & Margaret of Ace Architects are no strangers to exhibiting their impressive collection of miniature architecture which they’ve assembled during the last 20 plus years. The exhibition, named ‘Grand Miniatures,’ features more than sixty replicas of columns, obelisks, arches, cathedrals and historic European structures. The 19th Century replicas are from the “Grant Tour” and will be on display at SFO’s International Terminal now until May 2011. According to the press release about the show, “The “Grand Tour” of the great cities of Western Europe originated as an educational rite of passage for wealthy young Englishmen during the late seventeenth century. Travelers returned with marble busts, paintings, prints, and other artifacts representing classical antiquity for display in their studies and libraries. When the advent of mass transit made the Grand Tour accessible to greater numbers of travelers in the nineteenth century, the variety of keepsakes grew to include detailed miniatures of the buildings and monuments viewed along a fairly standardized itinerary that included lengthy stays in Paris and Rome. Most (of the souvenir building replicas) were produced during the latter half of the nineteenth century. Some of the objects document buildings as they existed only at a particular time in history, while others depict structures that no longer exist. Some are not true souvenirs, but were made singularly as project proposals or elaborate gifts. All the miniatures, however, convey the architectural essence of the buildings they represent. The objects also suggest the range of structures considered important to those nineteenth-century travelers to Europe wishing to return with a symbol of their cultural inheritance.” Ace Architects have exhibited their collection in many places in the past, even at another airport – Orlando International with a 2008 exhibit called, “Miniatures are BIG.” David & Margaret have perhaps the largest collection of building replicas and literally wrote the book about Monumental Miniatures. 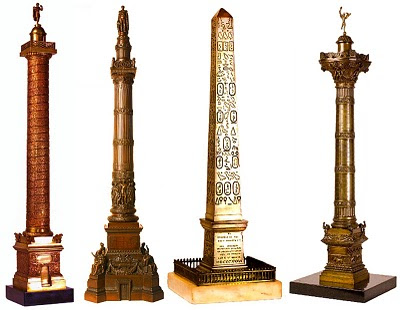