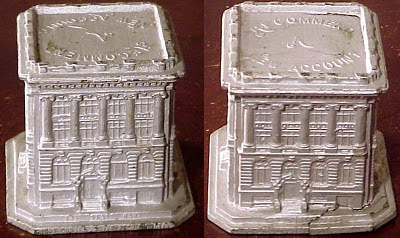 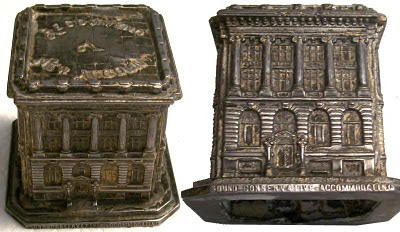 Last July, souvenir building collector Howie G. won an eBay auction for The State Bank Building Bank for about $400, outbidding several other astute collectors. “I’m surprised that it didn’t sell for more,” says Howie, “Given that it was manufactured by Art Metal Works and I couldn’t find it referenced in any of my guide books.” Not without its problems, the bank replica was missing its bottom and had an ugly crack at one corner. It was advertised as most likely being a replica of a Philadelphia bank building. “For some reason, I was immediately attracted to it,” recalled Howie, who began researching it. The first clue were the words inscribed on the top of the replica, “Recommend a New Account.” Howie’s email to the seller also revealed that the base of the building was inscribed “Sound, Conservative, Accommodating.” and that proved to be a Rosetta Stone in finding its provenance. Checking online, Howie uncovered an advertisement for The State Bank with the “Open a New Account” wording, for a now-defunct bank in New York City. “That further piqued my interest, as being based in New York, I have a special affinity for local buildings,” said Howie. An advertisement, see below, referenced the bank’s Head Office location of 374-378 Grand Street and he guessed that this was the building. Searching New York City Department of Buildings records, he found that a building permit had been issued to The State Bank for construction of a building costing $100,000 in 1905. The only problem was that the address was 52-54 Norfolk Street, not the Grand Street address. Checking New York City land maps at his real estate consulting company’s office, he realized that this was a corner location, both addresses actually referred to the same building. Not yet fully satisfied, he contacted the architecture critic for the New York Times, who also authors a Streetscapes column for the paper about local architectural history and to Howie’s amazement, he immediately received a return telephone call. The critic checked his records and emailed Howie a picture of the building; it was a match! “Seeing the picture made me appreciate the miniature building even more,” remembered Howie. “Because you can see the detail that went into making these old lead buildings, which along with inkwells, are my favorites.” Upon winning the auction, Howie had the building sent directly to Tony Tremblay in California for restoration. “Tony has restored several buildings for me, and while some collectors prefer theirs to remain in original condition, I like them to be pristine. As usual, Tony outdid himself and did an outstanding job repairing the cracked corner,” Howie reports. “Once I received it back, I was amazed at how large it was, about 4 inches tall, instead of the usual 2-3 inches. Researching the history of these buildings is almost as much fun as collecting them, although sometimes it can be equally frustrating,” said Howie. 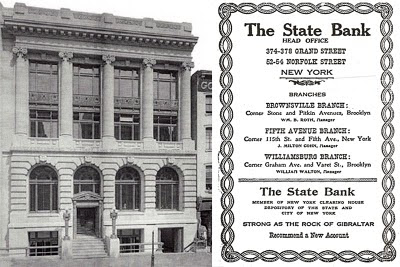